Dealing with university drop-out rates in the digital era

Universities are facing a drop-out dilemma.

According to the latest set of figures published by the Higher Education Statistics Agency (HESA) drop-out rates among first year students are showing no sign of letting up.

Published earlier this year, the statistics revealed that 26,000 students in England, who started studying for their first degree in 2015-16, failed to make it past their first year. Worryingly, it’s the third year in a row that drop-out rates among home students have risen.

Many industry professionals are pointing the finger of blame at increasing tuition fees. Students, regardless of their nationality, are still heavily influenced by traditional factors, such as academic reputation, location, employability and, of course, costs.

But that’s only part of the 21st century equation. Today’s students are becoming increasingly swayed by the ‘softer’ aspects of what a university has to offer them. This means, that from the very first moment they make contact, they expect to receive a high level of communication and support.

However, while providing open, transparent communications with potential, new and existing students isn’t a new requirement for universities, it’s proving to be a real sticking point for many.

It’s widely reported that the digital era has created a new breed of consumers, who are now more informed as they make their way along their higher education journey, thanks to the wealth of information they have at their fingertips. It’s also created a new breed of digitally-savvy students too, who expect communications to be rapid, responsive, personalised and consistent.

Effective communication is a critical lynchpin across all organisations and sectors, but never has it been quite so critical and relevant within the world of higher education as it is now.

Yes, universities may be aware of the need for good customer experience and many of them will in fact believe they’re delivering it. But the truth of the matter is, what they’re providing and what students now expect are at polar opposites.

The consequences are widespread and most certainly a contributor to drop-out rates, with students’ experiences not necessarily matching what they’ve been sold. Better engagement is vital for institutions that want to recruit and nurture satisfied students and drive improvements in both reputation and revenue. And this is how they can achieve it…

Joining up the student journey

Education institutions have long been turning to Customer Relationship Management (CRM) systems to attract, engage and communicate more effectively with their students via digital platforms at various different points along the student lifecycle.

However, it’s not uncommon for different departments within universities to take matters into their own hands by installing CRMs as a ‘knee jerk’ reaction to a specific, narrow need. Unfortunately, venturing down this route means they often wind up with multiple CRMs, that struggle to keep up with their business needs, and fail to provide them with a single customer view.

The solution stems from the ability to not just implement fully integrated, cross-organisation data strategies, but strategies that have secured leadership backing prior to implementation.

But with many IT teams being somewhat reluctant to instigate change within established universities, resistance to any kind of new digital initiative, especially those that could potentially threaten jobs, remain high, even in today’s digital world. In a recent survey conducted by the Harvey Nash Group a CIO who surveyed their IT team discovered that 78% were ‘happy to support the status quo’ and unwilling to support technological change.

Having a strong IT vision and securing buy in from the top are undoubtedly two of the key contributors to achieving a single source of truth. IT leaders also need access to flexible cloud technology, such as Microsoft Dynamics 365, alongside an agile approach to delivering solutions. Breaking down larger projects into smaller, more manageable quick wins is perfectly feasible, but these actions must run in conjunction with an overarching vision to reduce the risk of scattergun, disjointed activity taking place.

There are numerous benefits to be had from adopting joined up systems. Aside from the more obvious widespread efficiencies, these systems open up the possibility of introducing artificial intelligence, designed to streamline and automate processes, which is crucial if universities are to deliver a diverse range of services without significantly increasing their support service costs.

With drop-out rates and application rates rising in equal measure, now’s the time for higher education institutions to renew their focus on improving student engagement. Thankfully, there is a proven path, which has already been taken by some institutions. Here’s hoping more universities will embark on the same joined up journey and turn the digital era to their advantage.

Do you want to find out more about our proven framework for managing the student journey, increasing student satisfaction and delivering more efficient support services? This November you can join your peers and Crimson at BT Tower in London to learn about how digital transformation and emerging trends are impacting HE. 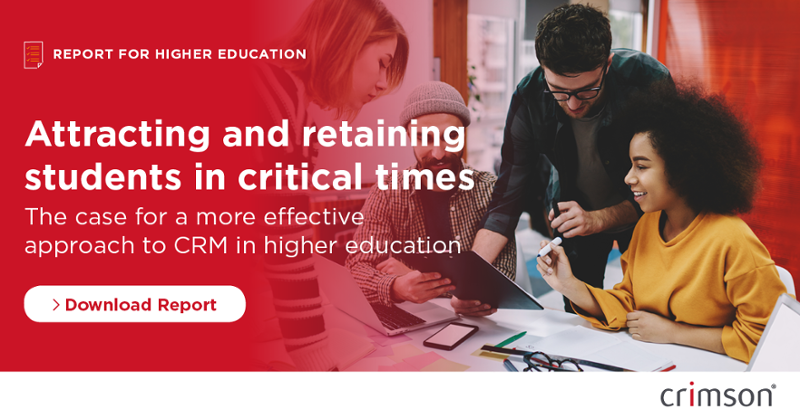